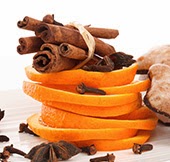 Christmas is here once again and its all sparkle and lots of goodies to eat and drink. This is when we get our bottles of spices out for the traditional Christmas cake and pudding and mince pies. However, is any of this good for us? Spices have been used for cuisine and trade since 2000bc (Wikipedia) and in the first book of the Bible, Genesis, there is the story of Joseph who was sold as a slave to spice merchants by his brothers. In the biblical poem Song of Solomon, the ‘beloved’ is compared to many forms of spices. Spices originated from Asia and Middle East and were among the most demanded and expensive products available in Europe in the Middle ages mainly due to the transport over thousands of miles. They are aromatic and give beautiful spicy tastes to many other now familiar foods that we eat such as curry’s and stir fries. They also have health qualities such as reducing inflammation and helping blood sugar balance.
Most of all, they were ‘Fit for the King’ being given in worship of the birth of Jesus by those who visited Him in those few days after being born in the manger.
Here are a few more nutritional facts about spices.

Cinnamon – 1 teaspoon of cinnamon contains 28mg of calcium, almost 1mg of iron, over a gram of fibre and quite a lot of vitamins such as C K and manganese. Several studies have shown improved insulin sensitivity and blood glucose control by taking ½ teaspoon of cinnamon per day. This in turn will help weight control as well as decreasing the risk of heart disease.

Cloves – The active principles in cloves are known to have antioxidant, anti-septic, anti-inflammatory and anti-flatulent properties. It contains an oil called eugenol which has local anaesthetic and antiseptic properties. It also contains a good amount of minerals such as potassium, manganese, iron, selenium and magnesium which are vital in our body. The spice also contains good amounts of vitamin A.

Cardamom – contains many chemical compounds that are known to have anti-oxidant, disease preventing and health promoting properties. Cardamom is a good source of minerals like potassium, calcium and magnesium. Potassium is an important part of cell and body fluids that helps control heart rate and blood pressure. It is also an excellent source of iron and manganese. Iron is required for red blood cell formation and cellular metabolism.

Ginger – Ginger maintains normal blood circulation as chromium, magnesium and zinc improves blood flow. It also improves the absorption of essential nutrients in the body by stimulating gastric and pancreatic enzyme secretion. It is a natural powerful painkiller as it contains some of the most potent anti-inflammatory fighting substances. As well as this, ginger decreases bacterial infections on the stomach, helps battle coughs and throat irritation and can help to inhibit fatty deposits from the arteries.

Nutmeg – Nutmeg has anti-fungal, anti-depressant and digestive functions. It is a good source of minerals like copper, potassium, calcium, manganese, iron, zinc and magnesium. It is also rich in many vital B-complex vitamins, including vitamin C, folic acid, riboflavin, vitamin A and many anti-oxidants like beta-carotene which is essential for good health.

Turmeric – Turmeric features antibacterial and antiseptic qualities, so can be used to treat wounds. There is evidence that it aids in the restructuring of skin so may prevent scarring after injuries. It prevents breast cancer by altering cancer cells as it contains a powerful antioxidant compound that has reduced the size of tumours in 9 different studies. It can also be used to ease the side effects and boost the effects of some chemotherapy drugs. Many other medicinal properties include detoxifying the liver, helping in the metabolizing of fat and preventing the progression of Alzheimer’s disease by removing the plaque build up in the brain that is believed to trigger Alzheimer’s. Turmeric has anti-inflammatory compounds which work to reduce joint pain and inflammation.

Method
Posted by Unknown at 02:27
Email ThisBlogThis!Share to TwitterShare to FacebookShare to Pinterest

Diana is able to work out individualised nutritional programmes to help you with all sorts of health issues. This is Optimum Nutritional Therapy and works to optimise your health, whatever your situation.

Optimum Nutrition is about providing the body with the right amount of vitamins, minerals and nutrients to do the job it was made to do and help towards obtaining optimal health. Living in our chemically cluttered world today robs us of a lot of these vital ingredients. By taking professional advice on the right things to eat and supplements to take, you can take the first step to being in control of your health - not leaving it to chance.

Diana has been practicing clinical nutritional therapy now for 15 years. She specialises in digestive disorders such as IBS, food intolerances, women’s hormonal health, eating disorders, arthritis, fibromyalgia, weight loss, chronic fatigue and children’s nutrition, especially that of children with learning difficulties, genetic disorders. She values the importance of continued professional development, keeping up to date by regular reading of current research and has attended many post graduate training courses.

It takes us 4 hours to wake up apparently! Amersham nutritionist Diana Wright tells @iainlee why. She comes prepared! twitter.com/BBC3CR/status/…